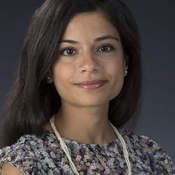 Bissan Ghaddar is an Adjunct Assistant Professor in Data Analytics for the department of Management Sciences at the University of Waterloo as well as an Assistant Professor in Management Science for the Ivey Business School at the University of Western Ontario. Prior to this, she was a Research Scientist at IBM Research Smarter Cities Technology Centre, Dublin, Ireland working on problems at the intersection of IoT, data analytics, and mathematical modeling and optimization for large-scale problems. She has also worked at the Centre for Operational Research and Analysis at the Department of National Defence Canada on applying simulation and mathematical modeling to high profile projects in anticipation for future needs of the Canadian Forces. She was also invited for extended research visits at the Universität zu Köln in Germany and the University of Avignon in France. Dr. Ghaddar received a Ph.D. degree in operations research from the University of Waterloo, Canada. Her research has been supported by prestigious national and international scholarships. She was awarded the ADONET Marie-Curie research grant for May 2007-July 2007 to support her research visits to the Universität zu Köln. Further, she was awarded the Natural Sciences and Engineering Research Visiting Fellowship for 2011-2012, the Natural Sciences and Engineering Research Council Alexander Graham Bell Canada Graduate Scholarship for 2009-2011, and the Ontario Graduate Scholarship for 2007-2009. In 2013, she was awarded the FP7 Marie Curie International Incoming Fellowship.