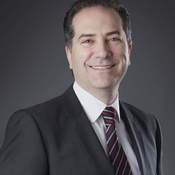 Carmine Marcello is President and Chief Executive Officer of Hydro One Inc., the largest electricity transmission and distribution company in Ontario. He was appointed President and CEO in January 2013.


Carmine joined Ontario Hydro in 1987 and has 25+ years of experience in the electric utility industry. He has held many senior management positions at Ontario Hydro, now Hydro One. In 2007 he was appointed Vice President, Corporate Projects and in 2009 he was appointed Senior Vice President, Asset Management (responsible for the life cycle management of Hydro One’s transmission and distribution assets including Hydro One’s Smart Grid Initiative).

In 2010, Carmine was appointed Executive Vice President, Strategy where he oversaw capital and OM&A programs valued at approximately $2.5B annually in the areas of Transmission and Distribution Asset Management, T&D Development, Business and Power Systems, IT, Telecom, along with the operations of Hydro One subsidiaries -- Hydro One Brampton Networks Inc. and Hydro One Telecom Inc.

Carmine is also active in a number of corporate and industry associations, currently serving as the Chair of the Hydro One Brampton Networks Inc. Board of Directors. He is a member of the Canadian Electricity Association’s (CEA) and Plug’n Drive’s Board of Directors.

He has served on the North American Electric Reliability Corporation (NERC) Member Representatives Committee, and was elected to the North American Transmission Forum Board of Directors in 2011. He is also a member of NERC's Electricity Sub-Sector Coordinating Council’s Executive Committee.


Carmine serves on the Electric Power Research Institute Research and Advisory Committee and on the Canadian Council of Chief Executives Advisory Committee on Cyber-Security. He has held previous positions on the Ontario Energy Network Board of Directors and is the past chair of the CEA Transmission Council.

Carmine holds a Master of Business Administration from York University, a Bachelor