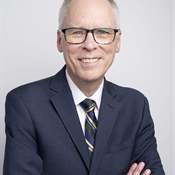 John Wilkinson, of Stratford, is a member of the Board of Directors, Greenfield Global and Former Minister of the Environment, Ontario Government. Previously, he was the Senior Vice President, Sustainability for Greenfield Global, Canada's largest biofuels and sole specialty alcohol producer. Of note, he served in the Ontario Legislature as an MPP from 2003-2011. John was called to Cabinet and served as Minister of Research & Innovation, then as Minister of Revenue and finally as Minister of the Environment. John was instrumental is securing the University of Waterloo's new Digital Media Campus in Stratford and serves on its Advisory Board. Currently he is Chair of the Stratford Perth County Community Foundation.