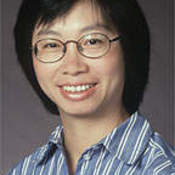 Weihua Zhuang received her B.Sc. and M.Sc. degrees from Dalian Maritime University, China, and the Ph.D. degree from the University of New Brunswick, Canada, all in electrical engineering. In October 1993, she joined the Department of Electrical and Computer Engineering, University of Waterloo, Canada, as an Assistant Professor. She was promoted to the rank of Associate Professor with tenure in July 1997, and then to Full Professor in July 2002. Since May 2010, she has been a Tier I Canada Research Chair in wireless communication networks. Her current research focuses on resource allocation and QoS provisioning in wireless networks, and on smart grid.

Dr. Zhuang is a Fellow of the Institute of Electrical and Electronics Engineers (IEEE), a Fellow of the Canadian Academy of Engineering (CAE), a Fellow of the Engineering Institute of Canada (EIC), the Vice President - Publications and an elected member of the Board of Governors (BoG) of the IEEE Vehicular Technology Society. She was the Editor-in-Chief of IEEE Transactions on Vehicular Technology (2007-2013), an editor of IEEE Transactions on Wireless Communications (2005-2009), the Technical Program Committee (TPC) Symposia Chair of the IEEE Globecom 2011, the TPC Co-Chair for Wireless Networks Symposium of the IEEE Globecom 2008, and an IEEE Communications Society Distinguished Lecturer (2008-2011).