This item is archived and can no longer be modified. Please contact an administrator if you wish to unarchive this object.
By Waterloo Institute for Sustainable Energy – December 4, 2015

On November 30th, WISE Members and Energy Council of Canada Fellows - Gord Stephen, Yonatan Strauch, and Stephanie Whitney - participated in the Newtonian Shift event organized by the MaRS Advanced Energy Centre, and hosted by the Waterloo Global Science Initiative (WGSI), at the Perimeter Institute for Theoretical Physics, in Waterloo. Gord, Yonatan and Stephanie are members of the Sustainable Energy Policy Group led by Professor Ian Rowlands who is currently representing UW at COP21 in Paris. They were joined in attendance by executive leadership from local utilities, representatives from MaRS and their corporate sponsors, Siemens, Capgemini, the Ministry of Energy and the developers and commissioner of Newtonian shift. Together they were asked to 'experience the energy transition to 2030 in one day', an experience that

The purpose of the Newtonian Shift- A Utility Strategy Simulation was for participants to ‘experience the energy transition to 2030 in one day’. The collaborative workshop-style game included many complex and dynamics factors to simulate the challenges and opportunities faced by the utility sector. Multiple perspectives were represented: private customers, large energy consumers, suppliers, grid operators, investors and government, and non-governmental organizations. The need to address ‘systems transformation’ in the energy sector, which has historically resisted change, was emphasized. Non-traditional entrants taking advantage of innovative opportunities (faster than sector incumbents) was discussed as one of four converging variables which may dramatically alter the way in which energy is consumed and supplied in the near future. 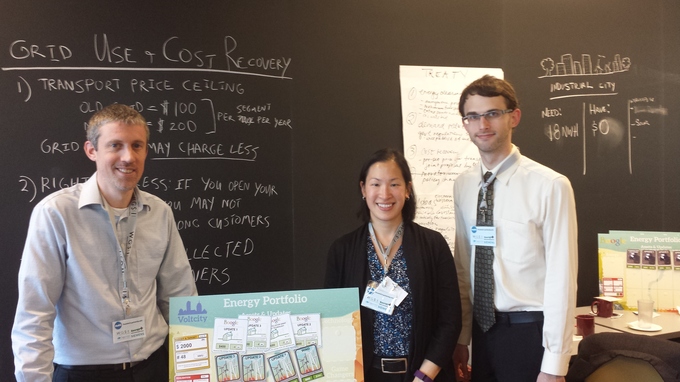 Yonatan Strauch- Dept. of Environment Resource Studies, Stephanie Whitney- Dept. of Environment Resource Studies
& Gord Stephen- Dept. of Environment Resource Studies
At the end of the game, the participants offered reflective commentary on the experience. Some of the major takeaways from this session – the first in Ontario – are summarized below:
1. Although participants were encouraged to adopt a role within the game that they do not hold in reality, the group quickly fell into expected roles, including competitive positions. Individual, competing interests and agendas tended to overshadow the common good (e.g. independence from imported fossil fuels, increased use of renewable energy sources, development and use of smart-grid technology to optimize resources, ensure equitable distribution of energy, etc.). The game was also structured to encourage collaboration and partnerships (e.g. with large-scale pricing and government subsidies), yet players largely focused on their individual perspectives, and were reluctant to come together and plan strategically for optimal and mutual benefit. Important issues that were flagged as concerns for the entire populous (e.g. threat of imminent terrorism, price uncertainty of imported fuel sources, etc.) were pushed aside, and short-term thinking was prevalent.
2. It was noted that players often sought guidance from the government entity, even though the rules of the game gave participants a high degree of latitude to develop innovative partnership agreements. Attendees pondered whether the group’s tendency to seek government direction was habitual, given that the energy sector in Ontario is heavily regulated, and actors do not have a lot of freedom to innovate. All participants acknowledged that it was difficult to make investment decisions in a climate of regulatory uncertainty.
3. Social equity was by no means guaranteed in the transition. Market failures that restricted price competition tended to benefit established players with access to capital, at the expense of those most in need of affordable power (but who lacked the financial wherewithal to take supply matters into their own hands). The technological and economic options available (many times subsidized by taxpayers) tended to concentrate wealth and access to energy, rather than equitably distributing them. Non-market social initiatives ended up playing an important (but ultimately insufficient) role in attempting to bridge this gap.
4. The Newtonian Shift (analogous to the energy systems transition) resulted in system chaos, in part because there was no coherent vision for how the rules and subsidies would lead actors’ selfinterests to align with the common goals of the system. Actors naturally looked after their self interest, but since the energy sector is a structured market, it was the structure that allowed individual action to result in free ridership and subsidy abuse.
Stephanie Whitney notes that from the student perspective, participating in the Newtonian Shift was an amazing learning opportunity, allowing a brief glimpse into the energy sector, from many angles. It was reassuring that at the end of the game, attendees expressed enthusiasm and optimism regarding the role of utilities in the energy systems transition. The exploration of new business models and partnerships by utilities, stacking multiple benefits and deepening customer relationships, was seen as integral for maintaining social license to operate, and fostering goodwill in the communities in which they reside. There appear to be ample opportunities for researchers to take on an active role, in collaboration with various energy systems actors, in the transition to a sustainable energy future.