Skip to main content
You are here: News › News & Updates › 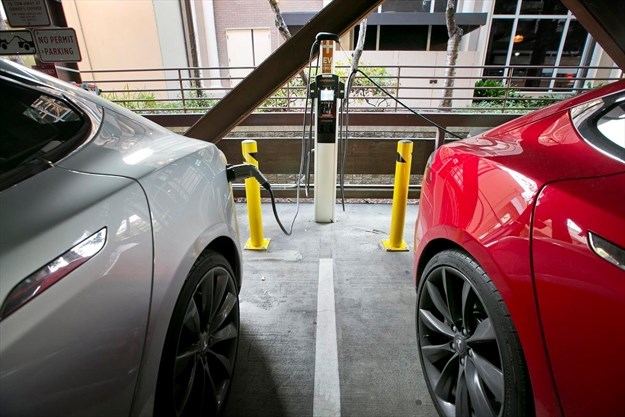 Two Tesla electric vehicles are plugged in at a EV charging station in Palo Alto, Calif. The University of Waterloo is installing a Tesla charging station on campus. - Tribune News Service file photo

It's a term that circulates among electric vehicle owners, the concern their cars will run out of juice before they're able to reach a charging station.

And it's often cited as one of the reasons we're not seeing as many electric vehicles (EVs) on the road as some would like.

At the institute, more than 100 of Nathwani's colleagues are researching a myriad of topics related to clean energy, including EVs and electric mobility, in collaboration with other stakeholders including business, industry and government.

To better understand the various types of charging stations and their impact on the electrical grid, the university is installing three new stations in the parking lot of the Engineering 6 building — a Level II charger, a Level III fast charger, and a Tesla charger.

The chargers, along with being used for research purposes, are expected to be available for public use. They're being installed ahead of a May 1 meeting at UW of the Ontario branch of the Tesla Owners Club.

"There's a huge need from a research perspective to support our understanding of charging cycles, its impact on the grid and, from a consumer perspective, the ease of having chargers available," Nathwani said.

A Level II charger includes the type you could have at home, plugging a car in to recharge overnight. A Level III, or fast charger, is much quicker because it draws much more power; they're also much more costly.

"They're not as ubiquitous, they're not as available," Nathwani said. But the prospect of broadening their distribution raises interesting questions for researchers.

"If you had 10 of them on a street … it could be quite problematic" for the electricity grid given their draw, he said.

Where do you locate them? Does the grid require additional infrastructure to support the demand? Do you restrict charging to off-peak times? Or do you install chargers with smart technology that could allow the equipment to intelligently manage its power consumption and prevent charging if the system is stressed?

The Level III charger being installed at UW has technology that can limit peak power use, and has a remote management interface that allows it to be integrated into an electric vehicle charging network.

The next evolution could be even more interesting, Nathwani said.

"EVs could actually become a very powerful source for providing power back to the grid," he said. If charged EVs were parked, connected to the grid, "the grid can see the cars and actually draw power from the battery," he said. "That's an enormous saving in terms of our societal infrastructure."

That concept isn't commercially available yet, and could see pushback from car manufacturers who maintain their batteries weren't intended to feed power back into the grid, Nathwani acknowledged.

As climate change prompts desires for a low-carbon economy, "the world has really changed substantially in the last six to eight years" when it comes to a greater adoption and availability of EVs, Nathwani said.

"Around the world, the shift is there for e-mobility," he said. "By 2030 … you'd be surprised at the level of market penetration."