Published
on
| 247 views
| 1 follower
members are following updates on this item. 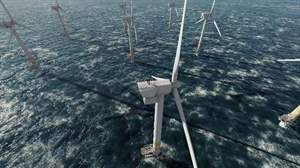 As the number of offshore wind farms around the world grows, so do efforts to make them more cost-effective and efficient. One way to do that is to avoid oversizing the power electronic convertors that transform the variable-frequency electricity produced by the turbines into a fixed frequency suitable for the grid.

In series-connected, single-string DC transmission systems — the most efficient way to transmit the electricity from distant turbines — operation of each convertor is influenced by those of all the other wind turbines in the farm. But traditional methods for sizing converters don’t account for those interdependencies.

WISE researchers Marten Pape and Mehrdad Kazerani decided to tackle that problem. They developed a framework for determining the optimal sizes of converters for offshore wind farms that use HVdc transmission. Their model considered a slew of parameters, from wind speeds and fault handling to turbine startup requirements and more.

Next, they applied that framework to three different wind farm configurations: one featuring differential power processing, a second with voltage-source converters, and a third with diode-bridge rectifiers and buck converters.

Finally, to put their methodology to the test, the researchers developed simulations for a fictional 450 MW wind farm in the North Sea. In two of the three configurations, the simulations revealed that substantial reductions in converter ratings can be achieved with only a negligible loss of power.

By quantifying the trade-offs between turbine converter ratings and energy production, Pape’s and Kazerani’s framework will help optimize the design of offshore wind farms — allowing them to maximize power production while avoiding unnecessary costs.