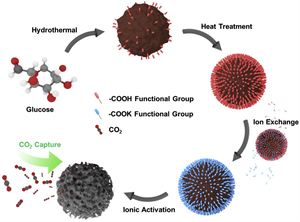 To prevent global warming from reaching catastrophic proportions, we need to slash greenhouse gas emissions. The question is how. WISE researchers have a nano-sized solution: tiny balls that trap CO2 emissions within smokestacks before they wreak climate havoc.

For a number of years, investigators have recognized that porous carbon can adsorb CO2. Now a team led by Waterloo’s Zhongwei Chen has developed a way to maximize that useful property.

The researchers began by creating nanospheres from glucose. Next, in a sequence of steps, they added potassium-containing functional groups to the surface of the spheres. Activating the potassium does the final, crucial work: etching pores into the underlying carbon framework without destroying its structural integrity.

By adjusting the density of the functional groups on the spheres, the researchers were able to control the size and density of the tiny tunnels. Ultimately, they produced a sphere that was 95.5 per cent pores. Not only that, each pore boasted the optimal diameter for trapping CO2.

Under typical low-pressure smokestack conditions, the sponge-like spheres could capture 1.58 mmol of CO2/g — better than most carbon-based material.

Unlike existing methods, this eco-friendly approach doesn’t require large amounts of corrosive alkali agents. Because the main ingredient is glucose, making the nanospheres is cheap, and the process can easily be ramped up to large-scale production.

This powerful carbon-capture technology could play a big role in limiting climate change. But the applications don’t stop there. Chen and his colleagues see potential to use the nanospheres in water purification, energy storage and more.

Partners: The Natural Sciences and Engineering Research Council of Canada, WISE, the Canadian Centre for Electron Microscopy at McMaster University