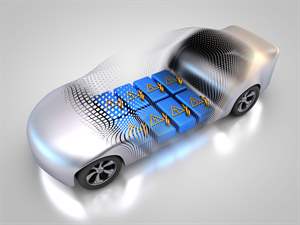 Even rechargeable batteries eventually die. Month after month of using a battery, topping it up and repeating the cycle gradually reduces its ability to hold a charge and the amount power it can supply. That’s why electric vehicle (EV) manufacturers suggest replacing the battery pack when its storage capacity drops below 80 per cent of maximum, and have 8 year warranties.

WISE researchers envisioned a different approach. A battery is only as strong as its weakest cells, propose researchers in Chemical Engineering. That means if a single cell fails or degrades below the 80 per cent threshold it impacts the battery pack as a whole. But rather than throwing away the entire pack, why not replace just the low-performing cells?

Dr. Fowler and his team set about testing the feasibility of this idea. First, they collected data on how cells degrade over time, subjecting two different types of lithium ion batteries to a variety of accelerated test conditions. Next, they developed a computer simulation of a reconfigurable battery pack and fed in the experimental data.

Their results reveal that checking the battery on a seasonal basis and replacing faulty cells makes it possible to keep the battery’s state of health safely above 80 per cent. That’s far better for the environment than replacing the entire pack. Moreover, since batteries account for a big part of EV costs, this approach promises to make electric vehicles more affordable, and could extend their life.