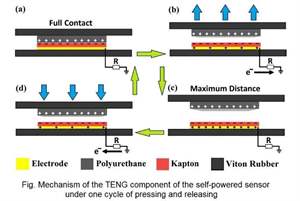 The world is filled with ambient energy: stray heat, vibrations, electromagnetic fields and more that pulse all around us. Instead of letting those resources go to waste, WISE researchers are taking full advantage of them.

In the case of a team led by Waterloo mechanical and mechatronics engineering professors Amir Khajepour and Behrad Khamesee, that means designing a self-powered sensor that taps into two different forms of freely available energy.

One is movement. Hassan Askari a PhD student of Khajepour and Khamesees’ team used a coil and magnet to generate electricity from mechanical energy. When anything from vibrating machinery to a jogger’s heel hitting the pavement compresses the coil, the magnetic field generates electrical current.

On top of that, the device taps into the triboelectricity created when specific types of material rub against one another — what we commonly think of as static electricity. The investigators created a triboelectric nano-generator (TNG) made from polyurethane and a polymer film called Kapton. When mechanical force brings the two together, electricity flows.

Packaged together, these mini-generators create a flexible, lightweight prototype that measures just a few centimetres long. And as the experimental results revealed, it can transform even low-frequency, small-amplitude energy into high power density.

After optimizing the device, the team successfully tested it in various settings: as a wearable sensor that harvests energy from human motion, as a sidewall-mounted sensor for monitoring tire condition, and as a general pressure sensor.

And that’s just scraping the surface. With absolutely no batteries required, this self-powered technology has all kinds of potential applications.