Mehrdad Kazerani, Mahmoud A. Allam, and Amr A. Hamad 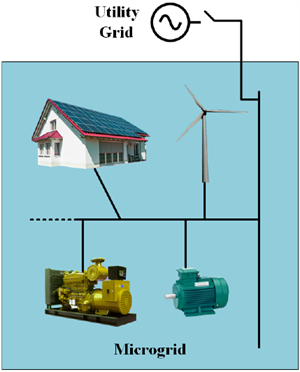 Microgrids integrate small-scale electrical energy sources and energy storage systems into local electrical distribution grids. This modern concept facilitates the integration of renewable energy sources, such as solar and wind energy, for greener energy generation. Also, microgrids are potentially more reliable than conventional electrical distribution networks, because they can operate independently if disconnected from the main utility grid under any circumstance. As a result of their new and unique operational philosophy, the tools used to analyze power flow in traditional electricity grids simply cannot do the job for microgrids.

That is why WISE researcher, Mehrdad Kazerani, and his PhD student, Mahmoud Allam, set out to develop a robust algorithm capable of analyzing power flow in complex microgrids operating under a variety of conditions. Their goal was to develop an approach that would work with the two possible methods for controlling frequency and voltage within a microgrid: droop control and isochronous control.

Kazerani and Allam began by breaking down their system model into smaller sub-problems, enabling them to develop relatively simpler equations that could be solved quickly. They also incorporated a broad range of factors that affect microgrids’ operation and analysis, including unbalanced loads, transformer connections and different load configurations.

The researchers then put their algorithm through its paces on a microgrid with 13 nodes, as well as a more complex system with 123 nodes. They tested it under various conditions, changing from light to heavy loading and switching between droop and isochronous modes of operation.

Their approach proved both fast and accurate, outperforming other existing analysis methods. With this novel algorithm, microgrid system operators now have a robust analysis tool that works with a variety of complex distributed generation networks with different types of controls.

Researchers: Mehrdad Kazerani, Mahmoud A. Allam and Amr A. Hamad

Source: Allam, M., Hamad, A., and Kazerani, M. (2018), “A Generic Modeling and Power-Flow Analysis Approach for Isochronous and Droop-Controlled Microgrids”, IEEE Transactions on Power Systems, Early Access (as of June 15, 2018).