Published
on
| 1,752 views
| 0 followers
members are following updates on this item. 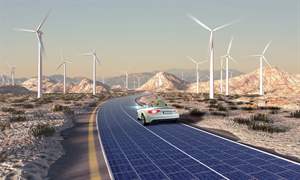 Energy-generating highways are far from science fiction. Waterloo’s Centre for Pavement and Transportation Technology (CPATT) and other groups have already developed prototypes of modular road panels that can produce electricity thanks to embedded solar cells.

But can panels made of sensitive photovoltaic material and tempered glass withstand the impact of 18-wheelers or Toronto’s rush hour traffic?

To find out, WISE researchers Susan Tighe and Andrew Northmore conducted a finite element analysis to predict how CPATT’s prototype would perform in real-world conditions.

Using modelling software, the duo tested the panel’s durability on four structural bases typically used in Ontario pavement: concrete, asphalt, granular and subgrade. For each, they applied the maximum wheel and axle loads allowed under Canadian regulations to different areas on the panels, checking whether they would crack or fail under the pressure. They didn’t.

In all cases, the strain put on the transparent and base layers of the panels fell well below their endurance limits, demonstrating that the prototype is road-worthy.

In fact, the additional reinforcement provided by the solar panels helped distribute tire loads, actually maintaining or improving the structural performance of the base they’re installed on.

With a better understanding of how much strain panels can take, engineers can now refine their designs to reduce costs. The results also suggest that researchers can move their trials out of the lab and into the field — paving the way for a network of solar highways.