Rethinking the Science of Ozone Loss and Global Warming 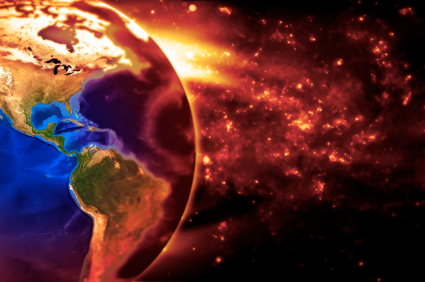 UW's Qing-Bin Lu isn't afraid to challenge accepted thinking on two of the biggest environmental issues facing our planet: ozone loss and global warming. In recent years, the physics and astronomy professor has developed some intriguing theories on the cause of these crises.

When it comes to ozone loss, Lu doesn't dispute the role of chlorofluorocarbons (CFCs). As these manmade substances break down in the Earth's stratosphere, they release ozone-depleting chlorine. The question is what causes CFC breakdown.

Lu believes the real culprit is cosmic rays. These energetically charged particles produce large numbers of electrons, which in turn can break down CFCs. Lu's experimental data show that polar ice particles can amplify this effect as much as 30,000 times. Meanwhile, the year-to-year variations in cosmic ray intensity closely match variations in ozone levels over the South Pole, providing intriguing support for his theory.

But if carbon dioxide didn't cause global warming, what did? Lu's recent studies point to CFCs. Although these powerful greenhouse gases are found in much smaller concentrations in the Earth's atmosphere than carbon dioxide, Lu's models reveal a strong linear correlation between CFC levels and global temperatures. According to his re-analysis of temperature data, halocarbon levels and carbon dioxide levels, CFCs alone could account for the 0.5-0.6 °C increase in global temperatures that occurred between 1950 and 2000.

If this is indeed the case, it has significant implications. Thanks to the phase-out of CFC use that began in 1999, Lu says the current global cooling trend can be expected to continue for the next five to seven decades.

Learn more about Qing-Bin Lu's research in the WISE library.