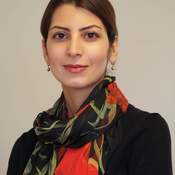 Sahar Pirooz Azad received her Ph.D. degree in Electrical Engineering, specialized in power systems, from University of Toronto, Toronto, Canada, in 2013. During her doctoral research, she focused on designing various control schemes for DC-segmented AC systems to prevent grid instability and large-scale blackouts. She was a post-doctoral fellow at the Centre for Applied Power Electronics (CAPE) at the University of Toronto in 2014. During her post-doctoral research, she focused on designing controllers with low communication requirements to improve multi-infeed HVDC systems stability. In 2015, she worked as an experienced researcher in the field of DC grid protection at the Katholieke Universiteit (KU) Leuven, Leuven, Belgium. Her research was a part of the multi-terminal DC grid for offshore wind (MEDOW) project; a Marie Curie initial training network funded by the European Commission. She worked as an Assistant Professor at the University of Alberta from October 2015 until December 2017. She joined the Department of Electrical and Computer Engineering at the University of Waterloo in 2018. Her research focuses on protection and control of power systems with embedded HVDC lines.