Can bacteria help create a cheaper fuel for our cars?

By Waterloo Institute for Sustainable Energy – May 8, 2013

An innovative biofuel that may one day be cheaper to produce than gasoline is being developed at the University of Waterloo by two chemical engineering researchers. 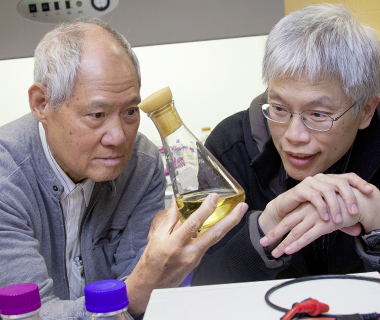 "If this is successful, we'll have a new technology that's Canadian. We'll also have students trained to do this, who will be among the highly-qualified people needed to develop this country's biofuels and biomanufacturing industry," says Murray Moo-Young, a distinguished professor emeritus in the Department of Chemical Engineering.

Biofuels are a renewable energy source produced by plants like sugar cane and corn. While these fuels are better for the environment than fossil fuels, they are often expensive to produce and they deplete food sources.

Moo-Young and Perry Chou, a professor of chemical engineering and a researcher in the Centre for Bioengineering and Biotechnology, are using genetically-modified bacteria to convert a chemical waste called glycerol into a clean low-cost fuel called butanol. Glycerol is a waste by-product of biodiesel manufacturing.

The advantage of using glycerol as the starting material, known as "feedstock," is its low cost. "Feedstock is normally expensive and a major cost in biofuel production. People pay to treat and dispose of glycerol, so it could be considered free," says Chou, who holds a Canada Research Chair in Biomanufacturing.

Butanol is an attractive biofuel because it's safer and has more energy content than ethanol, the most common biofuel worldwide. Without government subsidies, however, neither ethanol nor butanol can be produced as economically as fossil fuels today.

Chou and Moo-Young hope their innovative research can make butanol competitive with fossil fuels, or even cheaper to produce. They were recently awarded a large grant from the Natural Sciences and Engineering Research Council of Canada (NSERC) to develop new bacterial strains and bioprocessing techniques to accomplish this goal.

Scaling up for the future

The green energy profs are partnering with Centurion Biofuels, an industrial manufacturer in Hamilton, to help make the butanol conversion and production technology they're developing commercially viable.

Their first step is to genetically alter designated bacterial strains. Once they develop an artificial bug strain that can churn out butanol from glycerol at a much higher rate, Chou, Moo-Young and their team of up to eight Waterloo engineering students will apply bioprocess engineering techniques to scale up and produce large amounts of butanol.

Avg. Rating:
Posted By:
Waterloo Institute for Sustainable Energy
May 8, 2013