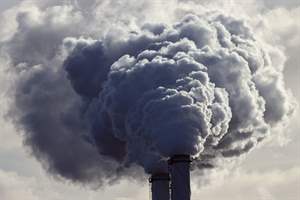 More than a third of the world’s electricity comes from coal-fired generating plants — and so does a hefty chunk of carbon emissions. WISE researcher Xiao-Yu Wu and his colleagues set out to make the process greener.

In the next-generation coal-fired plants, integrated gasification combined cycle (IGCC) is used to increase power output. High pressure and temperature is used to convert coal into syngas — a mix of carbon and hydrogen — that is burned to drive turbines. The more carbon you can remove from the syngas, the more cleanly it burns. But current pre-combustion carbon-capture technologies significantly reduce the plant’s efficiency.

Wu and his colleagues took a different approach. Rather than scrub the syngas, they broke it down and created clean-burning hydrogen from steam instead.

Their secret is a specialized membrane that lets only certain species, namely oxygen through. The researchers configured the system so that syngas is directed at one side of the membrane. On the other side, they directed steam generated using waste heat from the gasification process.

By integrating syngas oxidation, hydrogen production and carbon capture in a single unit, the system creates more efficiency than other pre-combustion methods of carbon capture (3.6% points higher in the base cases). Experimental results show it can withstand the harsh conditions of coal-fired power plants. And to top it off, the system costs little to produce.

Oversees all daily administrative functions at WISE and serves as the administrative assistant to the Executive Director. Provides strong customer focus that allows WISE members and partners to…