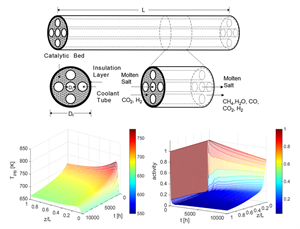 The more carbon dioxide (CO2) we pump into the atmosphere, the hotter the planet will get. That’s why researchers around the world are looking for ways to transform those emissions into useful resources. One promising approach is to convert them into methane fuel, using a hydrogenation process called the Sabatier reaction.

In theory, it’s simple: just add hydrogen gas to CO2 in the presence of a catalyst. However, there are technical challenges. Because the process generates a lot of heat, the reactor must be constantly cooled. It’s also crucial to limit the creation of carbon deposits that can deactivate the catalyst.

WISE researcher David Simakov is addressing those issues. He and his chemical engineering team have developed a mathematical model of an actively cooled Sabatier reactor.

The researchers tested the reactor performance using transient numerical simulations varying operating conditions such as pressure, cooling rate and feed rate, assessing their impact on methane production and catalyst deactivation. As well as looking at pure CO2 as a feedstock, the researchers also examined biogas: a mixture of CO2 and methane produced by landfills and the anaerobic digesters often used on farms.

Dr. Simakov and his team found that, although high pressure accelerates methane production, it also speeds up catalyst deactivation. According to their results, the key to optimizing methane production is achieving the right level of cooling.

By carefully managing operating conditions, they predict that it is possible to keep the reactor operating for up to 10,000 hours and still achieve conversion rates of 80 per cent or more — results that take CO2 hydrogenation one step closer to commercial realization.